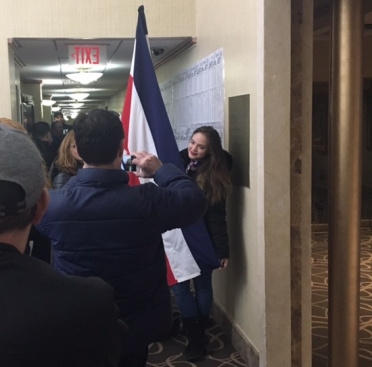 In New York City yesterday, many were engaged in setting up their Super Bowl party. But a small percentage of people were otherwise occupied: going to the polls to cast their ballots. Yesterday, Costa Ricans at home and abroad attempted to elect a new president.

My favorite tico, knowing I am a sucker for the excitement of democracy in action, permited me to join him on his epic journey for civic engagement abroad. We had to go to Newark. Not particularly epic, but it was a journey.

My memory of the last presidential election in the USA is still attached to a physical response. I suppose I did it to myself: for months, I obsessed over the political coverage, letting the analysts and reporters stoke my latent anxiety every morning. I went to bars with my friends to watch the debates, and let their hope and anger seep into me. And I was at home alone when the votes were being counted. The only person I wanted to talk to was my favorite tico. So I was eager to return the favor of soothing political mania if need be.
The pool of candidates in Costa Rica this year was large: 13 men, each representing a different party, made it onto the ballot yesterday. With so many choices, the potential of any one candidate to receive a majority is small: In yesterday’s election, the candidate who won the highest percentage of votes did so with just 25%. Imagine having a president selected by only a quarter of the votes? (one could argue that our own president of the USA was elected by a similar percentage of eligible voters but I digress). Luckily, Costa Rican politicians must receive at least 40% of votes cast to become president. Otherwise, the election will move into a second round between the two top candidates. This is what happened yesterday.
After weeks of political discussion on Facebook and Whatsapp, after listening to debates and watching political memes, the anxiety of the election won’t be released into celebration or disappointment. Instead, ticos worldwide will continue that pre-election question until April: “Who are you voting for?” The choice should be easy. Now there are only two candidates, and they share one name. Alvarado.