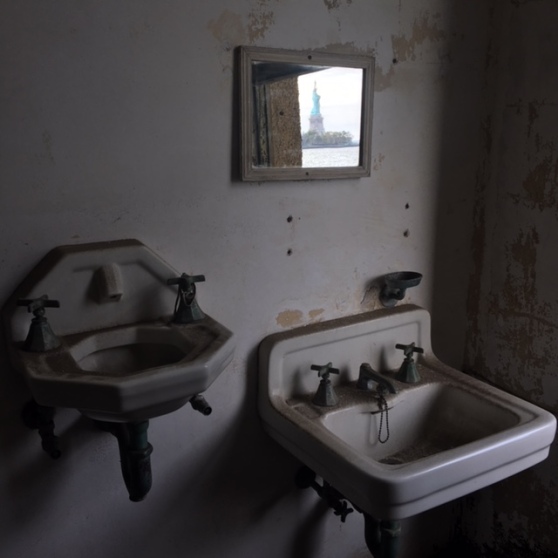 Normally at this hour blades of sun cut through the gauze of the living room curtains and backlit the veins of the philodendron plant, but not today. A heavy veil of clouds greyed the sky outside. Inside, the apartment was cool, hushed, blue. It seemed as though the sun were just dawning, instead of it being 10:30 in the morning.

She had a vague memory of waking at dawn to the chopping of a helicopter. Rushing to the window, she saw it hovering. It slowly descended until it was level with the hight of the low apartment buildings that bordered the street. Two small lights on its underside twinkled alternately like seed diamonds. Behind her, still in bed, she heard Cayetano move the covers.

“There’s a helicopter outside. I wonder what it wants?”

The helicopter was ominous. Its whirring blades skewed the quiet residential street into a dystopian scene, the helicopter a spy of the regime. Julia knew that inside, humans served its predatory bulk, but from her perspective now the machine was beastly and autonomous. It sniffed at the edges of the building, and Julia looked up at its underbelly from below, wondering again what it wanted. What disorder did it sense in her home? What fault could it find with her quiet life, lived sleepily as if beneath a calm pool, or within a bubble, separated invisibly but completely by the chaos and hardship of more difficult lives. Was the helicopter here to pierce her contented inaction?

The two diamonds blinked and the helicopter turned, moving slowly at first but then, nose pointed down to the trail of a new scent, hungrily away. By the time it returned, roaring past like a bloodhound on the trail, Julia was already back in bed, curled against Cayetano, half warm and covered and half cold and exposed, just as she preferred. When she woke up much later to the hushed blue of the morning, the helicopter was nothing but a dream.

What a year! @mdribble took the pic #happynewyear #ienjoyed2019
Sunset on a beach. #sunset #beach #costarica #playa #sol #palma
The best view 😍❤️😍 #costarica #view #family #windmill
Singapore See that boat in the distance? We were going to ride it all the way back home to New York. But you know what they say about plans, especially crazy ones like that. This adventure ends today. More adventures begin tomorrow! See you soon 😘😘 #singapore #bye #travel #adventure #discover #ship #boat #palmtrees #beach #trip #journey #explore
Singapore At the bottom of its island city, Singapore has created a cloud forest within a dome. Once again, this country dazzles us with flowers 🌸 #singapore #flowers #city #amazing #trip #travel #tourist #cloudforest
Singapore It’s a spotless city but my phone is hella dirty. #singapore #city#skyline #tourist #travel #trip
Singapore Get ready for the year of the PIG!!! #singapore #chinesenewyear #happy #newyear #travel #trip #adventure #pig
Singapore The dinosaur frond of a double coconut. The seeds of this plant can weigh as much as 42 kg, but nobody knows who it’s pollinator is. #plant #singapore #trip #travel #botanicalgardens
Melaka, Malaysia Underground jungle #travel #trip #jungle #plants #malaysia #melaka
Melaka, Malaysia The first call to prayer is before dawn. At the Kampong Kling mosque, the prayers are broadcast loudly over a speaker, but I can still hear the calls of other mosques echoing faintly in the distance. Kampong Kling was established in 1748 and instead of the traditional domes it has a triple-tiered pagoda roof. Nearby are Hindu, Taoist and Buddhist places of worship, giving the place the name”harmony street”. #travel #trip #religion #melaka #malaysia #tourist #mosque
Malacca, Malaysia Blazing into 2019 like... #travel #malaysia #music #oops #bike #newyear #happynewyear
Melaka, Malaysia These fun little rickshaws zoom around the narrow streets of the city, blasting any type of music that’s full of electronic beeps and drums. A popular muse is Pikachu, but we’ve also seen the drivers sporting My Little Pony and Baby Shark themes. #travel #trip #malaysia #bicycle #happynewyear
%d bloggers like this: