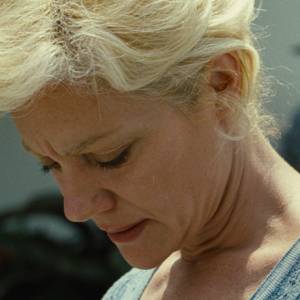 Veronica (María Onetto) lives in a cushioned world, where men and servants smooth her path through the day: they make her coffee, they brush her hair. Where is her jacket? Here it is, they help her into it. What is she doing? No, no Senora, you don’t sit in the waiting room. You are the doctor, come in here and meet your patients!

Veronica is confused. There has been a complication in her easy life: She hit something in the road, and she thinks it might have been a boy.

La Mujer Sin Una Cabeza (directed by Lucretia Martel) is a movie that deals with themes of doubt and passivity. The dreamy plot unfolds with Veronica’s placid smile pasted over the half closed doors of other, unimportant, worlds. As viewers, we never know what is happening here or there. We don’t know what Veronica did, and we don’t know what Veronica thinks. Her lack of agency asks the viewer to be more active, the doubt thrown into every scene demands us to supply the facts: Was that a dog lying in the road, or the limp figure of a child? Did Veronica hit her head? What was the doctors diagnosis? Is Veronica asking her husband and her lover/cousin to take care of the evidence? Was the boy found in the canal the same boy missing from the garden store? Everything in La Mujer Sin Una is a question.

The infuriating combination of passivity and uncertainty leaves the viewer with questions, questions that stretch beyond this plot-line: Who in society is being protected from themselves? Who is complicit in their sheltering, and who is hurt? What does a woman gain from letting herself relax into the arms of a society that cacoons her with the condition that she never breaks out of that cocoon?