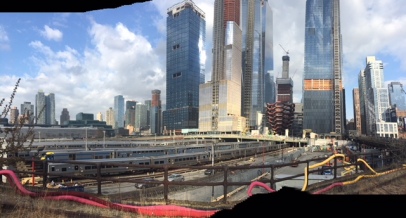 Here is a piece I wrote that expanded on an earlier post about the Highline in NYC. I tried to get this published to no avail. What do you guys think? Do you have any tips of getting freelance writing published?

On the far west side of the crowded island of Manhattan, where space is dear and lives are conducted in close proximity, an alchemy of sorts is happening: space is being created where there was none before. Or, rather, one type of space is being turned into another type. Out of thin air, the West Side will soon have a new park.

This park is the centerpiece of Hudson Yards, a $20 billion mixed-use private real estate development by Related Companies and Oxford Properties. In addition to the park, the project consists of 16 skyscrapers, constructed on a platform above the West Side Rail Yard. The crown jewel of the project is a 15-story climbable steel sculpture that has been likened to a “snakeskin tea cup”, a “garbage bin”, and a “huge bed bug exoskeleton”. The illustrations of the interlocking staircases rising around an empty middle space on Hudson Yard’s official website remind me of a honeycomb beehive. For now, it is simply being called the Vessel. The Vessel is the creation of Britain’s celebrated and sometimes controversial designer Thomas Heatherwick, and will add one mile of vertical climbing to the park’s 14 acres of public open space. Stephen M. Ross, the Related chairman who enthusiastically commissioned the Vessel, says “It will be to New York what the Eiffel Tower is for Paris.”

My friend recently proposed to his fianceé on the top of the Eiffel Tower. A woman standing next to them was so overcome that she started to cry, so she’s become a part of the story by sharing in the private joy of two strangers. Our lives have a funny way of unfolding in public places. Sometimes we plan for that, throwing rowdy birthday parties at restaurants, or planning an elaborate marriage proposal. At other times, life takes us unpleasantly by surprise in the middle of the street. Whenever this happens, it’s nice to have somewhere to go to ride the drama out. New York City is full of parks and plazas where residents can witness each other perform and endure life. Though these public places are ostensibly there for leisure and recreation, to be completely successful they must accommodate much more: in a city, public parks serve as a common ground for the community of strangers. Though we may not acknowledge one another, we know that we are seen. “Public space is for living. Its value must be felt with the soul,” says Enrique Penalosa, Colombia’s happy-city Mayor of Bogotá.

One way residents and tourists can find the Vessel is via the famous High Line, which enters from the south along a formerly abandoned train track elevated above the streets of Chelsea. It’s not my favorite New York City park, but I’ve certainly meandered its gardens of native plants and battled its hordes of tourists my fair share of times. I’ve also been on the High Line as life grabbed me and gave me a few unexpected shakes. I was there a few springs ago, surrounded by shivering, sobbing second graders. We had gone on a field-trip in the middle of a very cold snap, and we were unprepared. I stood there, immobilized by the huddle of my miserable students, and I couldn’t help the bitter laugh I let slip to the chagrin of a nearby tourist wearing a warm-looking jacket. And it was on the High Line where my boyfriend confessed one summer night that he’d cheated on me. I remember stomping heedlessly through crowds of people to cry dramatically on a railing overlooking the Lincoln tunnel traffic below, feeling comforted by the imagined support of sympathetic strangers nearby.

Journalist George Packer writes that there are two types of public space in the modern city. “The first thrusts people together in a public space, a hive of activity. Its essence is accidental and spontaneous. The second leaves nothing to chance. It tells people that they are subservient to the state and, in a sense, irrelevant to it.” As overwrought as the High Line is, it is the first kind of space: available for us to simply do things inside it. There, we are welcome to live our lives. Mr. Ross and Mr. Heatherwick profess that they hope for the same outcome with the Vessel. Though the cheapest of the new Hudson Yards apartments are priced at $2 million, the space is advertised as enjoyable for all. “Vessel will lift the public up,” states Heatherwick’s studio website. With its 2,500 stairs rising to a height of 150 feet, the sculpture will certainly do that for some. But only time will tell if the Vessel will function as a viable public space. Susan K. Freedman, president of the Public Art Fund, worries about the mess of High Line crowds navigating 154 flights of stairs. In 2015, 7.6 million people visited the High Line. How will these numbers function in directionless, vertical space? The most viable traffic-control solution is to have free timed and ticketed entry, but that will certainly reduce the number of spontaneous visitors. Marriage proposals can fit into a schedule, but it’s less likely that a person will use their planned time at the Vessel to answer a difficult phone call. And so the accidental and spontaneous part of public life quickly starts to fall away.

Just below Hudson Yards in Chelsea, long-time residents have felt displaced in their neighborhood as bodegas and laundromats are replaced with art galleries and cafés, which are then replaced with corporate headquarters and luxury bakeries. Once popular hang-out spots have been converted into spaces that don’t serve lower-income residents and thus feel unwelcoming. With less space, the chance street interactions that make a neighborhood into a community become less common. Chelsea will soon have a new park, and at the center will be the Vessel. But the privately-owned-and-operated Hudson Yards will most likely become Packer’s second kind of public space, where entry and movement are controlled and monitored, and citizens are left feeling beholden to a highly curated experience. “You won’t have experienced 21st century New York until you’ve walked to the top of the Vessel,” said Ross at the groundbreaking of the project in April of 2017. New York City is a space that we experience together, usually accidentally and often spontaneously. The Vessel is a $200 million sculpture, and it will be crawling with tourists. That is not everyone’s New York City.

Recently, I visited the Hudson Yards’ construction site. The Vessel calmly waited, assembled but unfinished, in the center of the activity of skyscrapers rising all around. Red protective sheeting covered the guardrails, highlighting the shiny undersides of the soon-to-be famous staircases. I asked a security guard standing nearby what he thought of the sculpture. “I think it’ll be a great place for someone to jump off of,” he laughed. Maybe he’s right: One way or another, the public will find a way to live out their lives, in public.

4 thoughts on “On the West Side, a new “Eiffel Tower” is Under Construction”