I had a vivid dream. I wanted to document it. I used an app called Bazaart to make a digital collage. Welcome to my dream!

My fingertips are the first to wake up. Then, strangely, my tongue, which distastefully notes the staleless of my mouth. Even though my eyes were still half glued with sleep, I am aware, in the neon darkness of the predawn, of Stephen’s shadowy form moving around the room. At the window, he becomes a man again, his silhouette tall next to that of the cactus on the windowsill.

“I smell smoke,” he says again. My sleep-heavy body lets in a new layer of sensation: sirens, many of them, drifting towards us from all directions. Their scream sounds like a red light, flashing and turning, fading and then becoming loud. Stephen comes back to bed, sniffing at the air but reassured that the smoke is not our problem. All I can smell, with my groggy nose, is the bitter perfume of wet cigarette butts. A light flashes by our window, briefly illuminating the cactus’s shadow in red and orange, and Stephen begins to snore. I lay awake with the scent of bitter cigarette corpses, amazed by the confidence sleep requires. It comes back to me eventually, that senseless confidence, and I dream of incessant floods. 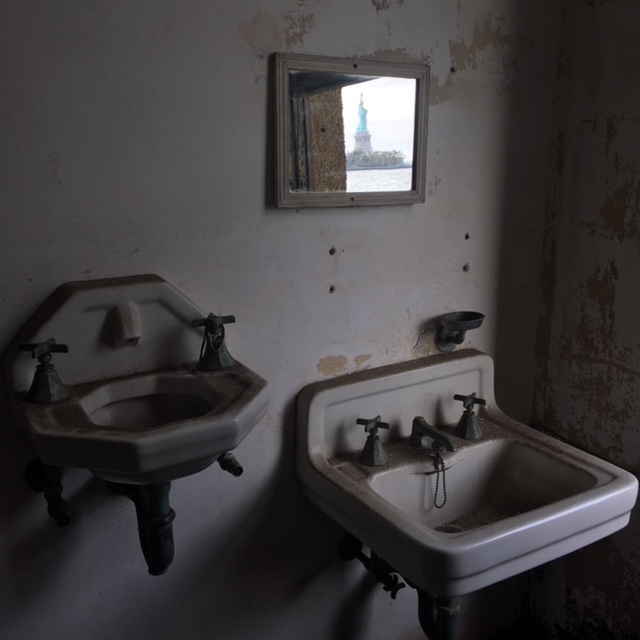 Normally at this hour blades of sun cut through the gauze of the living room curtains and backlit the veins of the philodendron plant, but not today. A heavy veil of clouds greyed the sky outside. Inside, the apartment was cool, hushed, blue. It seemed as though the sun were just dawning, instead of it being 10:30 in the morning.

She had a vague memory of waking at dawn to the chopping of a helicopter. Rushing to the window, she saw it hovering. It slowly descended until it was level with the hight of the low apartment buildings that bordered the street. Two small lights on its underside twinkled alternately like seed diamonds. Behind her, still in bed, she heard Cayetano move the covers.

“There’s a helicopter outside. I wonder what it wants?”

The helicopter was ominous. Its whirring blades skewed the quiet residential street into a dystopian scene, the helicopter a spy of the regime. Julia knew that inside, humans served its predatory bulk, but from her perspective now the machine was beastly and autonomous. It sniffed at the edges of the building, and Julia looked up at its underbelly from below, wondering again what it wanted. What disorder did it sense in her home? What fault could it find with her quiet life, lived sleepily as if beneath a calm pool, or within a bubble, separated invisibly but completely by the chaos and hardship of more difficult lives. Was the helicopter here to pierce her contented inaction?

The two diamonds blinked and the helicopter turned, moving slowly at first but then, nose pointed down to the trail of a new scent, hungrily away. By the time it returned, roaring past like a bloodhound on the trail, Julia was already back in bed, curled against Cayetano, half warm and covered and half cold and exposed, just as she preferred. When she woke up much later to the hushed blue of the morning, the helicopter was nothing but a dream.

They grew up together playing in the slick sand of the Long Island Sound. Mollie was the granddaughter of a rich man who owned many of the grandest houses in Glen Cove. Minor’s family was more modestly well-off. They were married a week before he shipped off for his second tour of naval duty, as a captain of a warship stationed in the Phillipines, and their first son was born before he came back. They lived in San Francisco, New York City, and finally settled with their three children in a little stone house on 40 acres just outside of Willmington.

Mollie’s wispy hair and crooked grin made her the “fun one” of the couple. She was known for her mischevious cooking, such as the wine jell-o that she liked to serve to her grandchildren. In the fall, Minor sometimes went out on the porch and shot a goose from one of the V-shaped flocks that flew over the house, and Mollie plucked it, cooked it, and presented it to be eaten. Their cocktail parties were frequent and sometimes raucous. They were an admirable couple, and it was shocking when she died (of complications from a hip surgery), but what surprised everyone the most was that he didn’t die with her.

For five years he lingered on. His children helped him to move out of the stone house and into a home, and he had to give up his guns and his tractor. At the breakfast table old ladies wearing pastel sweaters twittered around him while he read the newspaper, and in the afternoons he sat by his window and watched the ravens circle a copper beech tree down by the forest’s edge. One spring, half of the beech tree remained bare while the rest of it grew green with sprouting buds. By the summer, it was clear that the half tree couldn’t survive. Minor, too, was dead by November.

He found the path to heaven clear enough. It was smooth and narrow, and flanked by great bushes of goldenrod on either side. At the gate he asked for Mollie, but no one had heard of her. “Heaven’s a pretty populous place, you know,” he was told. He found a river, rushing with ice and trout. She wasn’t there. Nor in a peach orchard, the warm grass brushing his hip and hopping with katydids. “Are you sure she made it?” somebody asked him. He was sure.

He found a cool looking bar and decided to rest for a bit, knowing he wouldn’t find Mollie in there. He ordered a scotch and asked the bartender about Mollie. The bartender was young and wore a short embroidered vest over a clean white t-shirt. He gave Minor the whiskey in a fine blown-glass cup.

“You know, a lot of you new-comers are lookin’ for someone. Who was she, anyway? An old flame? A childhood love? A sister? A daughter?”

“She’s my wife,” Minor drank his scotch, suddenly impatient. There was no point to being in heaven if she wasn’t there with him.

“You’re wife? Well, if your vows were anything like the rest of ours, they didn’t say nothing about any kind of obligation after death. You might just find out you don’t have a wife anymore.”

Minor finished his drink and held the glass, looking at it. Green glass blended into a red blush, and at the lip all color had bled away to the finest rim. “No, I know she’s somewhere around here, waiting for me. I just have to remember where we said we’d meet.”

“Well, I wish you the best of luck. Heaven could use a good romance.” The bartender made his way down the bar, rubbing the wood with a rag until it glowed.

Outside, Minor looked left and right down the neat dirt road. To the left, the buildings became more crowded and cars stopped for people as they crossed the street between busy sidewalks. To the right, the houses gave way to fields of yellow grass and the odd grove of trees. Minor turned right. 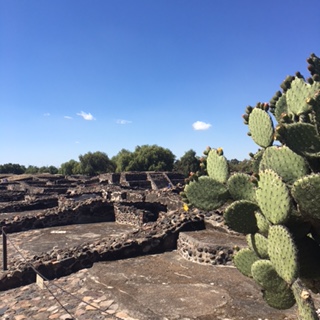 I’m the only one who’s been to Mexico City.

I know of a place. We’ll have to take a taxi, though.

The taxi-bus is on a cliff, overlooking the city. A nun leads us, smiling, to the launch pad. I’ve done this before, but I didn’t like it. The nun anticipates my fear. Above us, the taxi-bus is hovering, already primed to go. It begins to lower, coming closer and closer to our uplifted faces. My parents smile, welcoming the newness of this experience. I crumple, my body’s survival instinct stronger than my brain’s rationalization: “The taxi-bus is lowering until it can absorb us. Once it has come close enough, we will appear on the inside, safe and sound.” The solid mass of the vehicle is too much for my body. The idea presses me down in a faint to the floor, and I come to on the inside.

We are flying. The pilot smiles responsibly, just as the nun had below. He looks forward into the sky, bringing us to dinner. There is one other passenger besides us, strapped in next to the pilot. We are not strapped in.

The pilot has a neat trick. Do my parents want to see? They do. The back of the taxi-bus opens. We are unguarded from the velocity of the sky disappearing behind us. We are not strapped in. My parents let their bodies slide out of the back. They are walking in the sky. They walk in the shape of a square. They walk in the shape of a line. They walk slowly, as if in a garden with large manicured hedges. They leave a yellow dotted line behind them.

I am too afraid. I grip the wall of the taxi-bus, the wind and velocity tearing at my hair, my clothes. I am crying, and my tears fly out of the back of the plane, to my parents, who are walking in the sky.