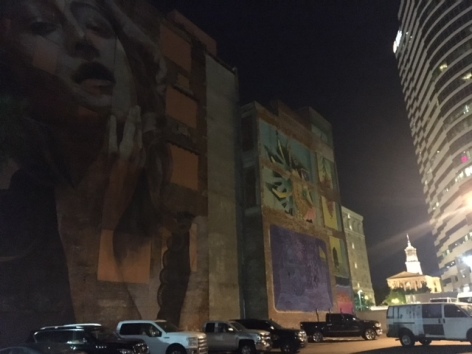 I am a white girl. That is one aspect of who I am, and though I vacillate on how important an aspect it is, I won’t deny that being a white girl, both in my home country of the USA and abroad, has a big impact on my experience of life.

I can’t remember ever being unaware of the weight of this particular quality. The elementary school I went to was the “alternative” public school in a university city that pats itself on the back for its progressive values. My formal education was a funny mix of strong progressive curricula taught by somewhat clueless, sometimes guilt-stricken white teachers (that’s how I understand them in retrospect. As a child they controlled knowledge, though rarely had a good grasp over the classroom). In high school I noticed, and enjoyed, when I was the only white student in a class. As a young adult, I roamed the hemisphere of the Americas, living in Trinidad, Brazil, Louisiana, Colombia and elsewhere. My self, my race, and how these shift meaningfully across political communities has always intrigued me.

In recent years, the way I think about being white and female has been jolted. The jolts come cyclically and sometimes unpredictably, the early contractions of the birth of something new. Mixing metaphors, my self conception, especially as it relates to my race, feels like the little silver orb in a pinball machine, bouncing up against walls, flying up ramps into new realms, and dropping down into the darkness of disappointment and shame.

The thing about being me, a white girl (and I’m not every white girl), is the ease with which I move through the world – sometimes doors are opened in front of me, sometimes hands are held out to help me up. Sometimes people smile. Most of the time I feel safe, at least as safe as possible in this world.

But I think about this ease, and the cost of it. As an individual, I want to be known for the qualities I have developed in myself, and for the blueprint my family layed down for me to build upon. I want to be comfortable. As a member of a society, I want to be respectful of the lives and the happiness of others, of their families and histories. I want to work for our lives and our collective and individual happinesses. For me, being white sometimes means that the two lived experiences are contradictory.  I think I’ll have to give something up of myself for the health of this society.

But what? Is it my eager voice that I should quiet when I’m in a group of many other white women and a few women of color, shifting my self from expressive individual to listening demographic? Is it my delicacy that I should trash, as I interpret the critics of society as personal affronts? Should I stop asking for answers from people who have their own shit to figure out? Yes.

Social media. It connects me to old friends across the world. It gives me a platform where I can share the small triumphs of my day, and where I can be inspired by the humor, insight, and beauty of others, people who would be (and, I think, largely are) strangers otherwise. It is incredible that we now have a way to bypass the judgmental gatekeepers of “culture” in order to share and promote all of the cool things that we are doing.

But what about all of that not cool stuff? What about of all that shameful, violent, racist, and hateful behavior that it seems many people incorporate into their daily interactions? This month, a couple of people have viraly infected my social media accounts. And unlike Beyonce, who is also having a moment, they are not celebrities, and they are not being celebrated. Far from it. They are being shamed.

The characters I am referring to have much in common. They are both white. They are both every-day citizens, previously unknown beyond the small circles of their day-to-day lives. They were both captured on video by other civilians, doing something that is indicative of the way racism plays out in this country. Both threaten to use the police as a way to enforce their racism. Both characters have been identified and linked to institutions and professions. And both are being being relentlessly, publicly shamed.

There are also differences between the two, and these differences address how we understand racism in this country. One of the characters, lets call him Loathsome Lawyer, had been caught on video on at least three prior occasions, yelling racist and xenophobic slurs at strangers. In the most recent video, he threatened to call ICE on a restaurant employee speaking Spanish to a customer in New York City. His bigotry is well documented and clearly stated with the words that come out of his own mouth. This sort of racism (overt, violent, individualistic, legal) is easily identified. It is what we often think about when we think of a “racist” person, and since the Lecherous Lawyer is so vitriolic in his hatred, he almost serves as a comfort: “Oh, I would never do something like that! That’s horrible! Racism is bad.” I don’t do that, therefore, I am not racist.

The other character, lets call her the Pestiferous Caller, tried calling the police on a Black family having a barbecue in the park, and lurked around their site complaining about the kind of charcoal grill they were using. She is shown standing a few yards away from the barbecue with her phone to her ear, threatening the barbecuers with police action. She does not articulate her racist motivations, though the bystanders nearby do make those clear. Thus, her actions are somewhat up for interpretation. Maybe the barbecuers really weren’t supposed to be using charcoal. Maybe Pestiferous Caller just really hates the smell of smoke on her walk around the lake. In a different society, perhaps her actions could be understood as simple uncalled for bitchery and rule regulating. In the United States, though, a relentless history of systemic racism means that the unexamined actions of white people easily play into the gears that work to repress a substantial portion of the population because of the color of their skin. This is the sort of racism that white people are being called upon to confront in themselves, even though it may be very uncomfortable. This is the kind of racism that the Pestiferous Caller has become a much-needed symbol for.

Social media not only lets us communicate rapidly; it enables users to pass information in whatever form they want. In the Pestiferous Caller’s case, after her video went viral she was transported into unenviable immortality by becoming a popular meme illustrating the ways that white people police Black lives, often in deadly ways. Internet artists have pasted her image onto many famous Black scenes, including Martin Luther King’s speech at March on Washington, and Rockwell’s painting of Ruby Bridge’s brave walk to school. “I’d like to report a graduation” reads a meme of the Pestiferous Caller next to a picture of Chadwick Boseman speaking at Howard University. Her disapproving frown hovers over and behind scenes of Black success, Black camaraderie, Black joy. Pestiferous Caller has become a vivid illustration of the latent racism that even well-meaning white people use to maintain a status quo that they might not have even acknowledged. And this sort of racism destroys the lives (and barbecues) of people of color every single day.

In his book So You’ve Been Publicly Shamed, Jon Ronson writes that social media tools like Twitter were used very powerfully from the beginning as “the democratization of justice.” Voiceless people suddenly had the ability to expose the wrong-doing of the very powerful. Companies suffered from attacks when they misused their privilege. Wrongs were righted. Then the Twitter army started using its power against small timers as well. When a young PR executive with 170 Twitter followers tweeted, before boarding an 11-hour flight to South Africa, “Going to Africa. Hope I don’t get AIDS. Just kidding. I’m White!” Twitter turned against her, too. Her life was dismantled over the course of those 11 hours: when she turned on her phone after the flight, she found mockery, rape threats, and that she had lost her job.

For his book, Ronson spoke to many people who had gone through a similar experience. He worries that the ease and joy of publicly shaming strangers have led to ideologues prematurly winning over humanity. “Maybe instead of gleefully flaunting her privilege, she was mocking the gleeful flaunting of privilege,” he thought as he watched the woman’s life being torn apart before his eyes. But social media is such a swift force, there really isn’t any time for “maybe.” Maybe the Pestiferous Caller hates charcoal smoke. Maybe the Loathsome Lawyer was suffering some sort of mental break. It’s too late for those maybes to matter anymore: these characters have been called to justice, and justice will be served.

It is one thing to be called out for something you’ve done, even to be mocked. Perhaps just repercussions include termination from employers. That the mob of internet anger often turns to gleeful violent fantasies is worrisome and inappropriate. Maria Vargas Llosa recently said “If you fight terrorism with terrorism, than you are a terrorist.” I  want to live in a better world, and I know that we cannot do that through perpetuating threats of violence, even against people who have acted violently in the past.

The much needed conversation about public shaming will take place in the same space where the shame occurs, and only those who want to will engage. In this age of social media, of fast information and even faster judgement, we are all accountable for our actions. If we have become sloppy in the way we treated one another, if we casually rest upon the mistreatment of others, it is time to reexamine ourselves. If for no better reason than self-preservation: your dirty deeds might be caught, confronted, and life as you know it could easily become a mockery. It is ironic that these machines demand us to revisit our humanity, to measure ourselves against the constantly shifting tapestries of different ideologies. It is incredible that social media has so quickly done what nothing else did: to quickly and recognizably personify the ills that society so elusively dodges. This is an incredible tool, and at the moment it is still largely democratic. With humanity, responsibility, and action we can use social media to change the world (we already are). I truly hope that it is a peaceful revolution.