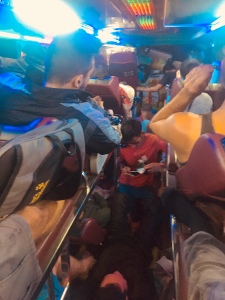 Two days ago, Andrés and I, along with a handful of tourists, Vietnamese merchants, and several bushels of cilantro, crossed an imaginary line together. The line wasn’t visible, nor was it tangible, but nevertheless it held a bit of that tension that zips along the lines defining countries. On a forested mountain, we waited on the Vietnamese side for our broken bus to be mended enough to cross over to Laos, taking the opportunity to stretch our legs outside with a cup of instant coffee from a ramshackle restaurant catering to a clientele with nothing but time.

International border crossings are serious affairs, requiring preparation and a degree of respectful watchfulness. Ever since I was quite invasively interrogated at the Port of Spain airport I have known that the zone between countries, whether imaginary or spatial, is a place where simple rights can slip away. To make the land crossing from Vietnam into Laos, we had prepared by researching visa requirements for each of our nationalities, and methods of payment. We had investigated the most viable checkpoint for our itinerary. We knew when the border opened, and what towns were nearby. We were prepared for every aspect of the (admittedly, easy) crossing into Laos. Unfortunately, we there was no way for us to prepare for the bus that brought us there.

I knew we were in for it when a man on a scooter met us at the hotel door to pick us up. We had no tickets for the 24-hour bus trip, but the man recognized the travel agency that we had booked the trip through, and soon we were following him down the busy streets of old-quarter Hanoi. It was impossible to steer our suitcases around the parked scooters and small tables that cover the sidewalks, so we walked in the street, trying to follow the man on the scooter with our eyes, already blocks ahead. When we finally caught up, he told us to wait, and swerved away to join the traffic of the city.

He came back a half hour later with more tourists. We were bundle into a van and brought to the bus station. The bus we met there was a double decker, but the bottom half was already full to the ceiling with boxes. We climbed up the stairs, taking off our shoes at the top, and found it almost as full as the bottom, not of people but of cargo: boxes, food, and building supplies stacked high on top of the seats. The cracked windows were held together with opaque advertisements, making it impossible to see outside. A few reclining chairs were available, and more below: the seats were also double deckers, and we were packed together, excuse the cliche, like sardines. I’ve never felt more like a sardine: salty with sweat, squished against my seat neighbor (luckily that happened to be my boyfriend) and somewhat horizontal.

And that was my position for 26 hours. “Somewhat horizontal” is very uncomfortable after only a few hours. A Vietnamese travel agent who was on the bus to research a potential contract with the bus company (not happening after this trip) told me that international buses in Vietnam make most of their money through shipping cargo. Having a few tourists on board has the duel benefit of letting them operate without a commercial license, and also ensuring a more lenient customs process, making it easier to smuggle in a few things. He said there isn’t really a better option for traveling via land to Laos, and that’s why his agency doesn’t handle trips to that country.

All things considered, the trip went very well. We made it to Vientiane in 28 hours, not too much longer than the estimate. The dust from the red dirt road that filled the bus’s air seemed pristine and unpolluted. No one lost their passport, and my preparedness meant that an unprepared young backpacker was able to pay his visa fee despite having no money on him. Compared to many border experiences, this was a piece of cake. But I hope to never ride another bus like that again.